Neko Atsume: Kitty Collector is a cat collecting game for iOS and Android. The English version released on October 30, 2015. It was developed by @hit_point. Screenshots taken by myself.

Neko Atsume: Kitty Collector is everything the title implies. As a cat enthusiast you want nothing more than to have as many kitties visit you as possible. Kitties of all shapes, colours and sizes. As many cats as possible! So what do you do? You put some food out in your backyard and wait for the cats to roll in, of course.

Neko Atsume is super simple, it was designed so the player needed to have no skill whatsoever to enjoy. The game starts out easily enough: put food in your yard to get cats to visit. These cats leave presents of fish which you can then use to buy new furniture and items to go in your yard to attract more cats. The more cats the more fish. These cats all have unique personalities and depending on how many times they visit they have a power level that determines whether they can kick another cat off of a toy to play with it themselves. The kicked off cat leaves a measly one fish as a thank you. Of the dozens and dozens of cats in the game there are 17 rare cats that only appear when certain items are placed in the yard. For example Billy the Kitten will only visit if the cowboy hat is on display.

There are dozens of toys and several different types of food. Better quality food attracts more cats but also costs more. You organize your backyard as you see fit, assigning toys and furniture to a predetermined selection of places. The fun comes from arranging your yard the way you want and buying the toys you want to see cats to play with. There is the option to remodel your backyard into different styles like western, modern, zen garden, etc. Cats come and go even when you’re not playing. You collect the gifts they leave behind when you return. Neko Atsume also features micro-transactions for those who wish to get fish now instead of waiting. 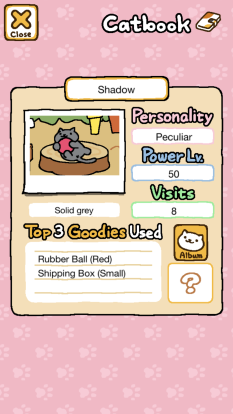 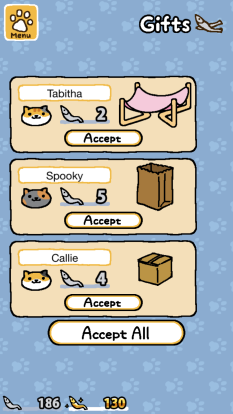 Neko Atsume is adorable. All of the cats are unique and feature different personality traits. They also favour certain toys over others so it’s up to you to design the best backyard to attract your favourite cats. There are practically no animations, the screen is mostly static. It’s very simple visually and that suits the game perfectly. There is no real challenge to the game, merely the enjoyment of looking at cats and buying toys. There is a photo mode that players can use to take pictures of their feline friends and save them in each cat’s album. Taking photos is very basic and there’s no way to adjust the size of each photo so often times you will have parts of other cats in your shot when you just want a picture of the one cat.

Neko Atsume has become a bit of an online phenomena. Google Play’s Japan store created a real life version of the game and streamed it for a little over eleven hours. Neko Atsume is a success considering how simple a concept it is and how little there is to do. But fans have latched on to this game and it has become a cult hit. They continue to produce fan art, videos, pictures and most importantly tiny, miniature clay Tubbs. 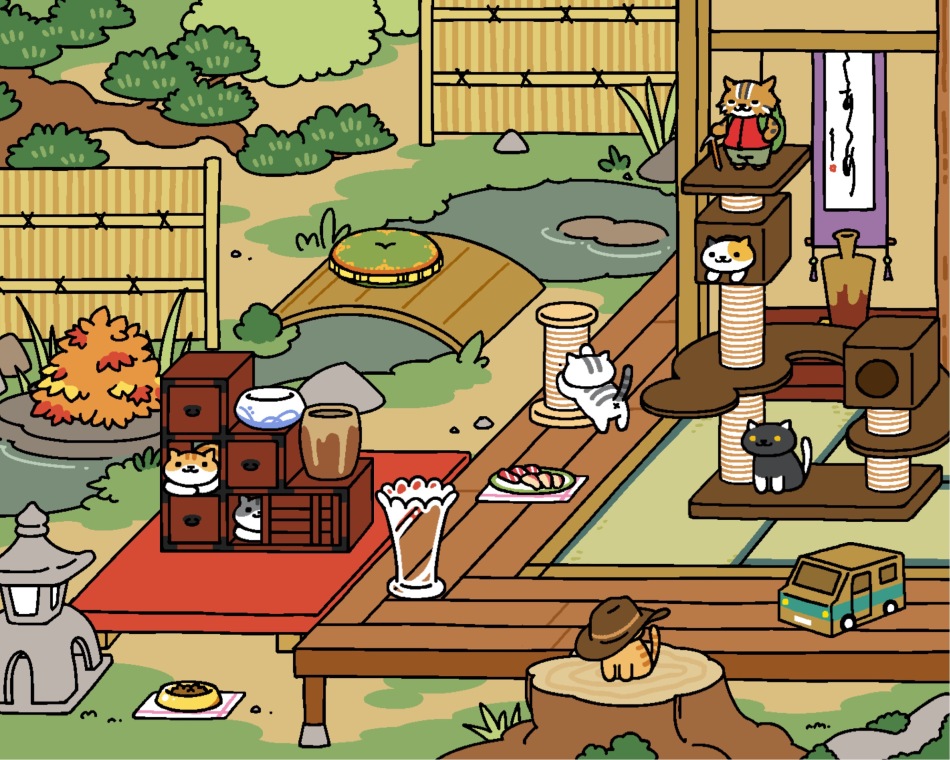 Neko Atsume is charming and can be quite addictive. Checking in on your yard every couple hours to see who’s visited and what they left (hopefully catch some cats playing) kept me coming back for months. Taking photos and sharing them to social media is of the utmost priority as well. It may not be a very deep or complicated game but that’s okay. Neko Atsume is for players who love cats and can appreciate its endearing, adorable art style.