Guacamelee! Super Turbo Championship Edition is a remaster of the Metroidvania beat ’em up platformer Guacamelee! which released for the PS3 and Vita back on April 9, 2013. Guacamelee! STCE released for PS4, Xbox One, Wii U and PC on July 2, 2014. It was developed ad published by Toronto based DrinkBox Studios (@DrinkBoxStudios). For more info check out the game’s site.

Guacamelee! has a simple enough premise. Juan just wants to go to the fireworks with El Presidente’s daughter. Unfortunately for Juan, there’s a certain demonic skeleton named Calaca who wants to combine the world of the dead and the living and become the ruler of all. Of course, this creates a slight conflict. While the premise may be simple the game itself is something special. Drinkbox Studios has delivered a very special, very endearing story in the form of a Metroidvania style platformer.

The first thing that struck me about Guacamelee! is its visual style. It looks unlike any other game I’ve played. The environments are very sharp and everything has a defined edge to it. This unique art style made my time with Guacamelee! an absolute joy. The characters and the world are so thoughtful and very memorable. The world in which Guacamelee! takes place is very well realized. The Mexican and Spanish themes are funny and appropriate and fit the visuals. All of the music in the game is very Spanish and compliments the game’s visuals and story. The characters themselves are well animated and well designed. The main character, Juan, is very distinct and one of the most memorable main characters I’ve played in any game. Guacamelee! is also chocked full of Easter eggs and what I can only assume is the developer’s nod to inspirations for Guacamelee! These Easter eggs are wonderful icing on an already amazing cake.

Guacamelee! is a very well balanced game. Every move that Juan performs feels like it does just the right amount of damage and at no point do the enemies feel frustrating. Death always feels like the player’s fault and not the fault of a poorly designed game. This is very important in a side-scrolling, fighting game where frequent deaths can get frustrating. Furthermore, Guacamelee! has very good pacing. The game gives the player a new move right when the player has gotten comfortable with the last
one. This keeps combat fresh and stops it from getting repetitive.
Guacamelee! has just the right amount of moves. By the end of the game once all the moves have been unlocked it’s very easy to keep track of what button performs what as they’re each assigned to a face button on the controller and not a combination of them like in other fighting games.

One problematic aspect is not enough attention was given to smaller details. Little things like Juan’s feet sticking straight out when standing on hills instead of resting on the slant
or several times an enemy would spawn on top of Juan and clip him through the wall, forcing a restart. The fast travel system is also a little problematic. There are specific locations scattered throughout the world where the player needs to go to fast travel. These locations are not very well chosen and were often far away from where I actually needed to be forcing me to run to my next destination. This quickly became arduous. These are all small problems that are easily fixed and would make the game more polished and overall a better experience. 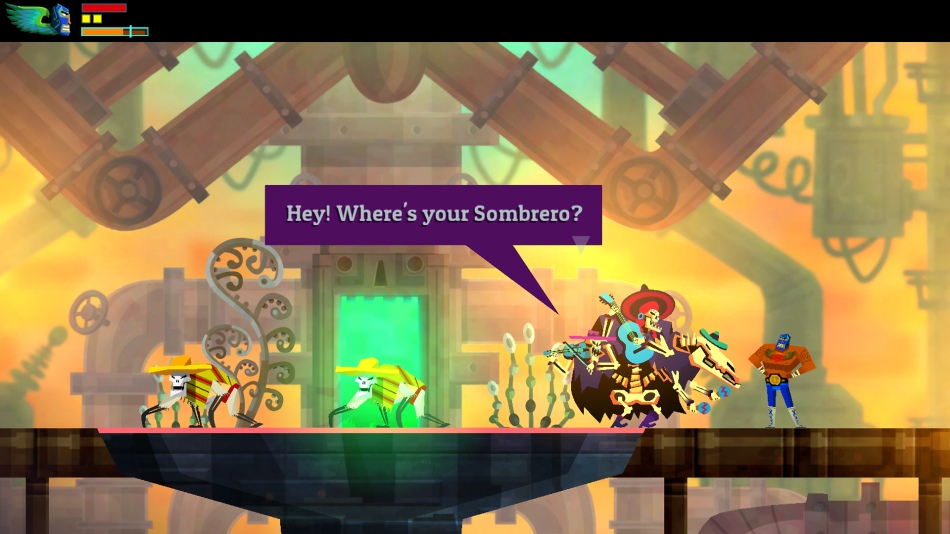 The Super Turbo Championship Edition version of Guacamelee! adds several tweaks and improvements, most notable of which comes in the form of an all-new, four-player co-op. Fighting with three of my buddies was a blast and added an element of replayability to a game I otherwise would have put down after beating. This version of the game also adds dozens of minor details that make the game that much better. Enemies now have health bars, there are several new enemies, there are two new areas; things like that. This is definitely the best version to play and an excellent reason to jump back into it if you have played the original version.